By JK NewsNo Comments
Bandipora, Kashmir, State
Bandipora, Dec 14: A government middle school was demaged in a massive blaze in Turknaadi Turkpora village of north Kashmir's Bandipora district, officials said here on Wednesday morning. Quoting an official, news agency Kashmir News Observer (KNO) reported that fire broke out in the school building at Turknaadi in the wee hours today morning. He said in the incident school building was damaged as fire tenders couldn’t reach early. The area is around 12 kilometres away from the district headquarter. The official said the cause of the fire was being ascertained.
Read More
8Dec

By JK NewsNo Comments
Kashmir, Pulwama, State
Srinagar, Dec 7: Police on Wednesday attached a house for providing of intentional harbouring and logistic support to militants in Khrew. A Police Spokesman said, "On 19/20 August 2021, Police in Awantipora received an information through reliable sources regarding presence of a group of terrorists in the house of Gh Ahmad Najar son of Gh Mohd Najar resident of Danak Mohala Khrew who are conspiring to carry out terror act in the area." "Accordingly, a joint cordon and search operation was launched along with Army (50RR) and CRPF (185 Bn). When the cordon was being laid, the hiding terrorists fired indiscriminately upon the operational party with the intent to kill the Police/Security forces. The fire was effectively retaliated leading to an encounter", he said. The spokesman said ...
Read More
8Dec

By JK NewsNo Comments
Kashmir, National, Sports, Srinagar, State
Srinagar, Dec 8: National Institute of Technology (NIT) Srinagar on Wednesday defeated NIT Uttarakhand by 26 runs in the finals of All India Inter-NIT Faculty and Staff Cricket Tournament at Sports Cricket Ground at Visvesvarya National Institute of Technology (NIT) Nagpur. The tournament was hosted by VNIT Nagpur and 20 NITs from across India participated in the mega event. Earlier after winning the toss, NIT Uttarakhand decided to field first. On a tough surface, NIT Srinagar started well and scored 125/8 in 20 allotted Overs. While chasing the target, NIT Uttarakhand made a shaky start and lost their 5 wickets quickly during the Powerplay and was eventually bundled out for 99 in 18.2 overs. For NIT Srinagar, Captain Faisal Ir...
Read More
7Dec

By JK NewsNo Comments
Kashmir, Shopian, State
Srinagar, Dec 07: An encounter broke out between terrorists and security forces in south Kashmir’s Shopian district on Wednesday evening, police said. In a tweet, Kashmir Zone Police said that the gunfight was going-on in Watho area of Shopian. “Encounter has started at Watho area of #Shopian. Police and security forces are on the job. Further details shall follow,” the police tweet said. https://twitter.com/KashmirPolice/status/1600469289928364032?ref_src=twsrc%5Etfw%7Ctwcamp%5Etweetembed%7Ctwterm%5E1600469289928364032%7Ctwgr%5E7f9fd8277fe7cba81f1a4f6089f6507b1e7c55bd%7Ctwcon%5Es1_&ref_url=https%3A%2F%2Fwww.greaterkashmir.com%2Fkashmir%2Fencounter-going-on-in-south-kashmirs-shopian-police
Read More
7Dec

By JK NewsNo Comments
Kashmir, National, State
New Delhi, 7 Dec: Union Minister of State for Home Nityanand Rai on Wednesday said that there has been a substantial decline in militants attack from 417 in 2018 to 229 in 2021. While informing the Rajya sabha, MoS Home Nityanand Rai said, 14 persons belonging to minorities including 3 Kashmiri Pandits have been killed in UT of Jammu and Kashmir from January 2022 to 30th November 2022. He said that there were 123 terrorist incidents in J&K (till November 2022). 31 security forces personnel lost their lives in the line of duty while 31 civilians also lost their lives. "180 terrorists have been killed in Jammu and Kashmir in encounters with security personnel this year (till November 2022)", he said.
Read More
7Dec

By JK NewsNo Comments
Kashmir, National, State
Srinagar, Dec 07: Union Minister of State for Home Nityanand Rai on Wednesday said the government has a policy of zero tolerance against terrorism and that security situation has improved significantly in Jammu and Kashmir. News agency Kashmir News Observer (KNO) reported that Rai, while informing the Rajya Sabha, said there has been substantial decline in terror incidents from 417 in 2018 to 229 in 2021. "14 persons belonging to minorities including 3 Kashmiri Pandits have been killed in J&K since January, 2022 till 30th November, 2022," he said. He also said there were certain media reports of Kashmiri Pandit Sangharsh Samiti highlighting their security concerns. "Various measures have been taken by the government to protect the lives of minorities w...
Read More
5Dec

By JK NewsNo Comments
Kashmir, Srinagar, State
Srinagar, Dec 05: Vice-Chancellor University of Kashmir Prof Nilofer Khan on Monday announced a complete ban on entry and use of polythene in the campus as the varsity kick-started celebrations related to the UT administration’s flagship ‘My Town, My Pride’ initiative. The ban will be effective December 6, 2022. “I will inform all relevant quarters in the University that we will have a polythene-free campus immediately. Circular instructions will be issued not to allow any polythene bags in the campus from tomorrow (December 6, 2022),” the Vice-Chancellor announced at a function, soon after chairing a meeting of top officers where she passed instructions for the varsity’s departments to hold events related to the ‘My Town, My Pride’ celebrations. The Vice-Chancellor said academic ins...
Read More
5Dec

By JK NewsNo Comments
Jammu, Kashmir, National, State
Srinagar, Dec 4: BJP national general secretary, Tarun Chugh, who is the party incharge of J&K, on Sunday described the movie Kashmir Files as a historic cinematic expression and lambasted the International Film Festival jury for passing negative remarks about it. In a statement, Chugh said those who termed Kashmir Files movie as vulgar are are suffering from mental frustration. "It was real and tragic too which happened with our Kashmiri Pandit brethren. Those who termed the movie as vulgar are suffering from mental frustration", Chugh said while speaking to the media. He said entire world came to know about this tragic and heart wrenching incident after 32 years. He also said that truth cannot be concealed. "Be it genocide carried out by Hitler against Jews; genoci...
Read More
4Dec

By JK NewsNo Comments
Anantnag, Kashmir, State
Wildlife Department tranquilized and captured a leopard at Naidpora Larkipora area of Anantnag district on Sunday afternoon. Reports reaching that the leopard was spotted by locals inside the horticulture shed belonging to one Mohammad Amin in Naidpora Larkipora, following which they intimated the authorities. A rescue operation was launched by the Wildlife Department, Control Room Achabal, at the spot. After hours of efforts, the Wildlife Department team tranquilized the bear and shifted it to a natural habitat.
Read More 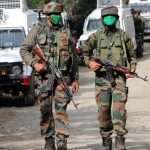